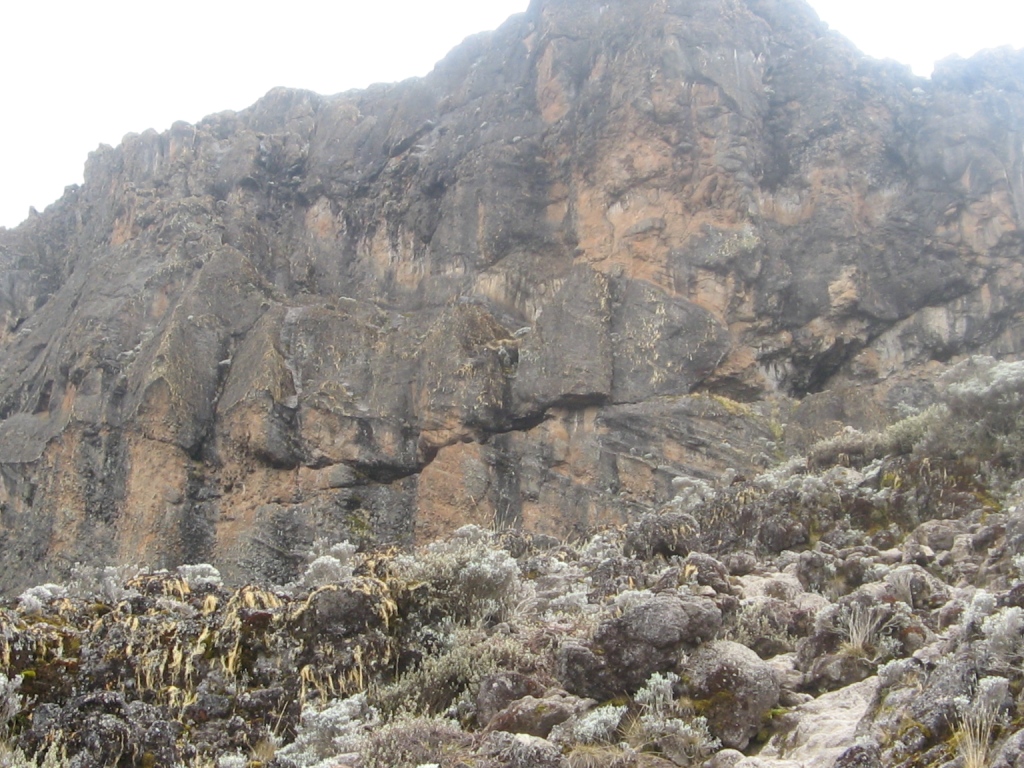 The fact that I am alive and well enough to tell this story is a major accomplishment after a day that defies explanation for its degree of physical difficulty. In fact the feats that were undertaken today would be a perfect addition to any EXTREME BOOTCAMP that anyone could dare to dream up. I remember some years ago meeting a very athletic looking young man in his 20′s in the Kilimanjaro airport who had just completed climbing Mt Kilimanjaro successfully. He summed up his experience by saying, “That was the hardest thing I have ever done in my entire life.” Today I found out why.

We left Barranco Camp this morning heading for the most formidable opponent we had yet faced on this journey – the Barranco Wall. It is a towering monster of solid rock which loomed above the camp and appeared impossible to scale. Yet somehow a trail had been carved out that zigzagged up the face of the wall. The wall itself was shrouded in mist as we made our way slowly up the trail. In some places the trail was simply steep and rocky, in others the trail seemed to disappear and you had to pull yourself over rocks climbing up higher and higher. At one point the trail was no wider than my hiking boot and you had to shimmy along clinging to the wall while the guide yelled the encouraging words, “Hug the rock! Kiss the rock!″ At this point, my husband Dave looked at me and said, “You never told me about this part!” He is no fan of hanging off the edge of a cliff. 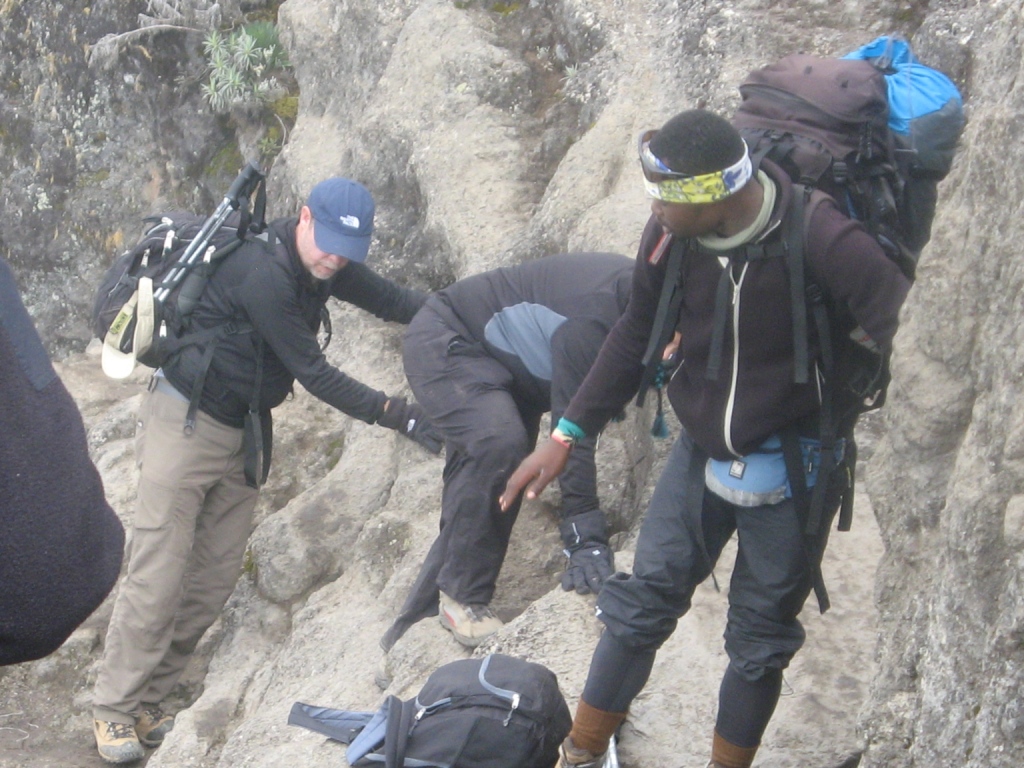 There is no explanation for our success in conquering the Barranco Wall except the pure mercy and grace of God. The joy of the victory was very sweet! But little did we know that there were two more ridges we had to scale that day before we would reach our next destination – Karanga Camp. Once we reached the top of the Wall, we rested for a few minutes and then proceeded to climb down the other side. The descent was steep but nothing treacherous like the way up had been so it was almost enjoyable. The scenery was beautiful in a very rugged sort of way. Mountain streams ran nearby and the mountain mist swirled about.

When we reached the bottom the guides pointed to the next ridge and said we were headed up there. I had no idea we were headed up again – but I have discovered in climbing Mt Kilimanjaro- that what goes down must go up again. So we trudged slowly – “pole pole” (pronounced po-lay po-lay) as they say in Swahili up another ridge that was at least as high as the Barranco Wall. WHen we got to the top – we started down again – and when we reached the bottom we started up a third ridge. Just seeing it was daunting and I was totally exhausted. When we were descending the third ridge to karanga Camp the trail was very steep and slippery from a recent rain. By the time we reached the camp I felt like I could scarcely place one foot in front of the other.

A hot lunch was waiting for us and we were famished after 6 1/2 hours of intense hiking – which was a full two 2 1/2hours longer than the guides had projected. It was three in the afternoon. It was cold and it started raining a few minutes after we sat down to eat. After lunch we played the card game UNO with the TOA teens and one of our guides and we all had some laughs. Dinner was served a few hours later and no one objected as we couldn’t seem to get enough fuel for the amount we were burning.

I am sitting in our tent as I write this and a downpour has been pounding our little canvas home. The temperatures are dropping rapidly and our main objective is to stay wam. Tomorrow we rise early again to make our way to Barafu Camp (Barafu means snow) which is the Base Camp from which we will make our assault on Uhuru Peak the following day. We will sincerely appreciate prayer at this time as each day has been progressively harder and the addition of rain and intense cold is very challenging.