The day started at midnight when our guides began leading our team up the summit trail from our Base Camp at elevation 15, 443 feet. None of us had enjoyed more than 2 hours sleep before we were roused from our sleeping bags at 11 pm to get ready. A few hours earlier we had been giving a briefing on what to expect the conditions on the mountain to be, signs of altitude sickness and had been given a medical test to determine fitness for the final ascent.

Actually this simple test had been done every single evening after the day of climbing was completed to check blood oxygen levels and resting heart rate. The purpose was to see how each person was doing adjusting to the daily increase in altitude. Everyone had passed.

There were five of us now since Doreen had to go back down the mountain on Day 3 after struggling with altitude sickness at the 12,000 foot level. I was so happy when we reached Barafu Camp and exceeded 15,000 feet of elevation and no one (including myself) was having any symptoms. Personally I had never hiked higher than 10,000 feet so I wasn’t sure what it would be like.

It was pitch black when we left the camp and began trudging slowly up the steep incline that was the summit trail. It was very cold and we each had five or six layers of cold weather clothing on as well as hats, heavy snow gloves and balaclavas. I found it hard to move in all that gear but cold was an enemy that had to be warded off. Each climber wore a head lamp- not unlike miners who work in underground coal mines. There were multiple groups of climbers who had arrived at Barafu Camp that day and were all making the midnight ascent as well. The sight of the long line of lights from the headlamps in the midnight darkness winding up the hillside was surreal. You could not discern where the horizon above the mountain ended and the starry night sky began. Was that a star at the top of the mountain or the light from a climber’s headlamp

The cold was numbing and it didn’t take long for it to begin to affect your hands and feet. The air was so thin it was hard to take a deep breath. The moisture in the air turned to ice crystals and then to snow. It was very quiet and you were alone with your own thoughts in the darkness and struggling to fight off the cold, catch your breath and put one boot in front of the other. You had to keep your eyes on the ground because the trail was both rocky and slippery as well as steep and you were walking in darkness and needed your headlamp to illuminate the path.

We had been told that it would take between 6 to 8 hours to reach the summit so you had to prepare yourself mentally for a very long difficult hike in very cold temperatures. We had been one of the slower groups so we knew 8 to 9 hours was more realistic. 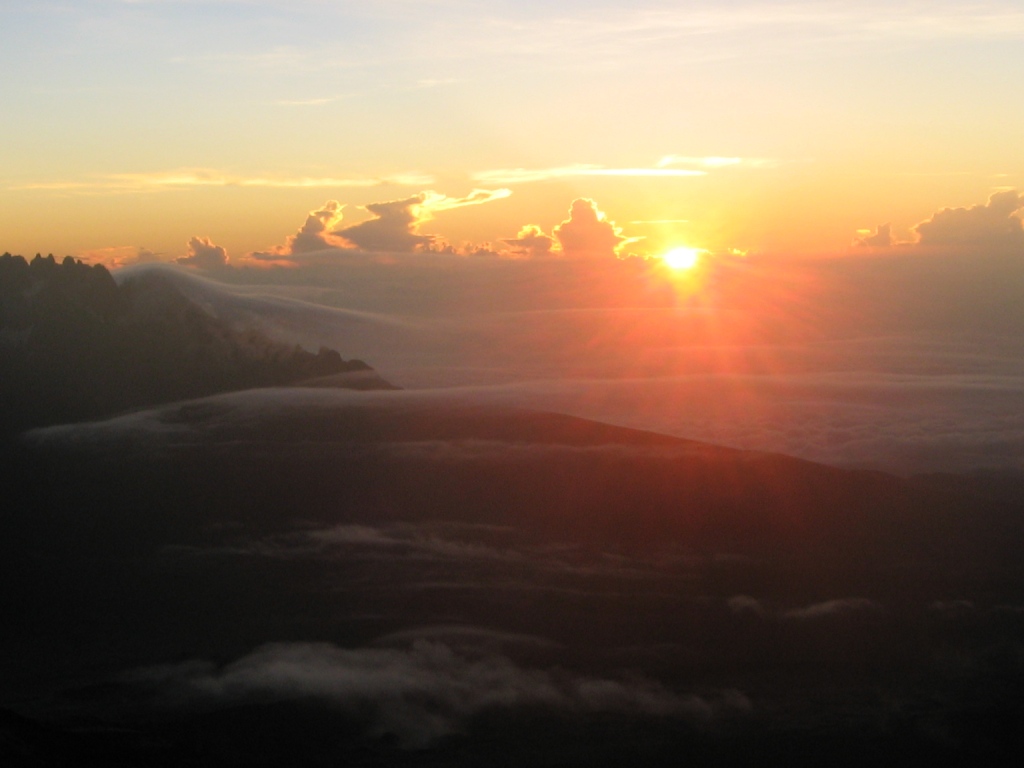 Just before six in the morning light started to dawn behind us. An orange glow was beginning to creep above the skyline. We stopped and turned around to see the beautiful sight of dawn breaking behind the Mawenzi peak – the second peak of Mt Kilimanjaro. The sky was slowly brightening and looking down from that high place above the cloud line was breathtaking – (or was that the lack of oxygen?) We had been climbing uphill for six solid hours in the freezing cold. We were exhausted and I had gotten sick twice and was feeling nauseous still. Though our guides had told us that you could push past the “normal” minor altitude sickness symptoms and you would eventually feel better, I wasn’t feeling better. One of our mountain guides had gone ahead with our TOA teens and Tim Kimmel, while two of them had stayed back with my husband Dave and I to see how I was doing and if I could continue. 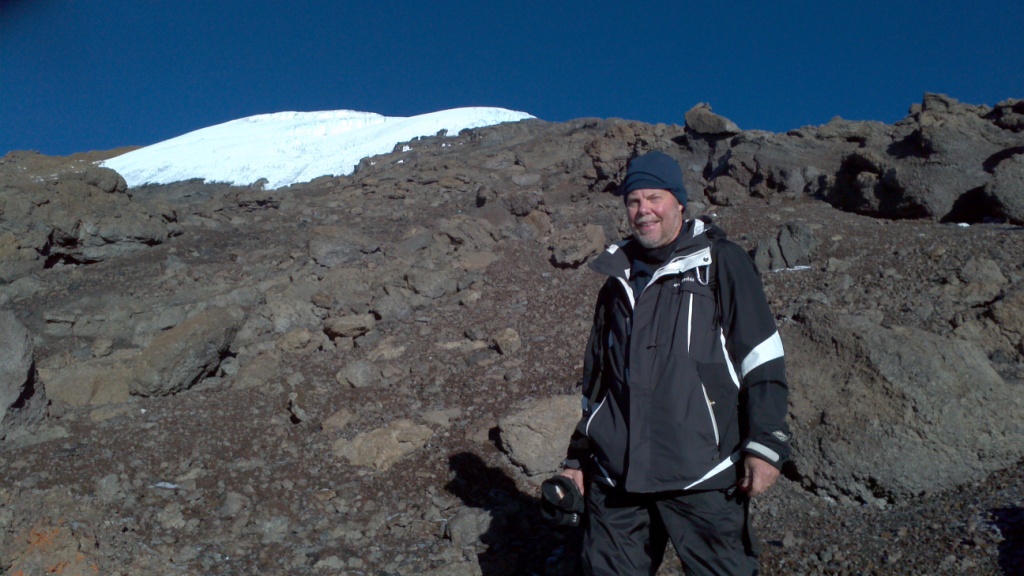 We pressed on for about 30 more minutes and we could see the glacier not far above us. We were at 17,747 feet according to our GPS device. Dave finally told me he did not think I should try to go on. He could see I was beyond exhausted and feeling horrible. After a brief discussion about it, I surrendered to his wisdom. I encouraged him to go on with one of the guides and I would go down the mountain with the other. But being the consummate gentleman that he is – he refused to leave me. He simply said, “I have nothing to prove and I came for you.”

We began the long painful descent. I had tears in my eyes as we turned back thinking how badly I wanted to be with our TOA kids on top of the mountain. But then I thought of Emanueli. He did not make it to the summit last year because of altitude sickness, and now he was back on the mountain trying again this year. I needed to just heed his example. I prayed he would make it this time.

It took us more than three hours to climb back down to Base Camp. I have never been so happy to crawl into a tent in my life! All I could do was lay down in my sleeping bag and pray for the three members of our climb team who were still on the mountain, until I drifted off to sleep. 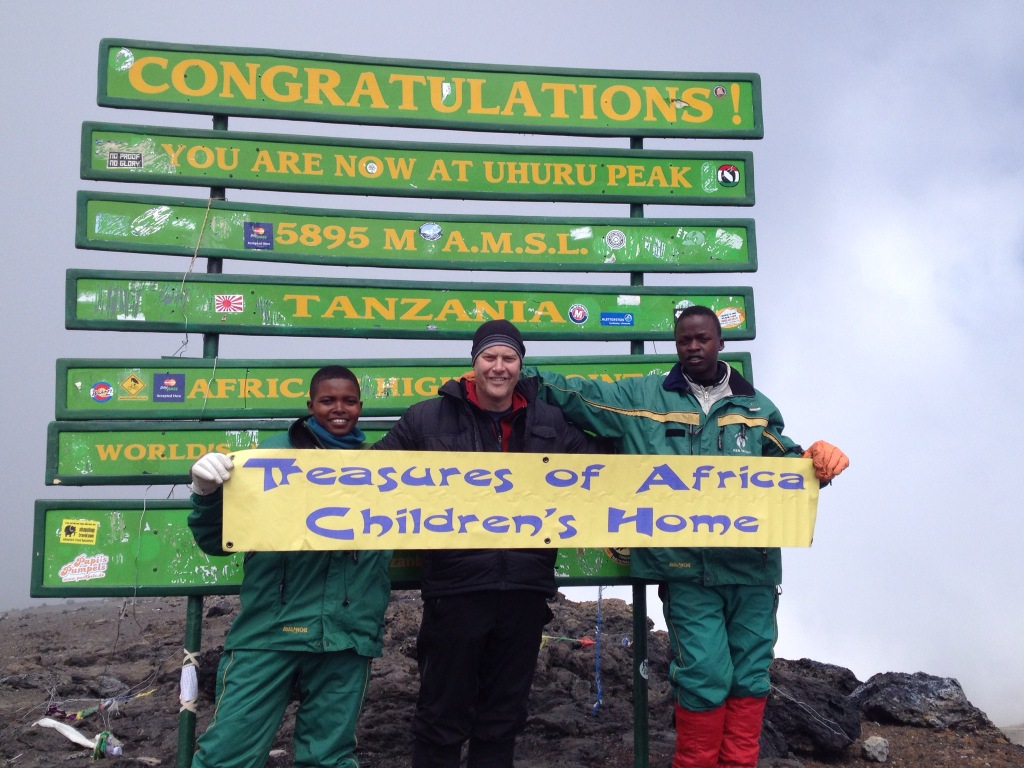 A few hours later I was awakened by Irene’s voice outside my tent.

“We made it to Uhuru Peak!”

We rejoiced over the victory of Irene, Emanueli and our fellow climb Team Member from the Seattle – Tim Kimmel. We had a hot lunch in the dining tent and then packed up and began a grueling 6 hour hike down to Mweka Camp – which was located just above 10,000 feet in elevation. Despite my begging the guides to let us stay at Barafu Camp until morning and then hiking down, they said simply it was not allowed. They have a practice of getting the climbers down to lower altitude as soon as possible to prevent more severe altitude sickness. Because of that – we ended up hiking a total of 16 hours that day – on a few hours sleep. We all agreed it could only be described as brutal and punishing to the body. The trail to Mweka Camp was so steep and slippery at certain points that one of our guides fell and bashed his knee.

During that hike down, we saw two different people being carried down the mountain to the rescue station. I watched them being carried past us and thanked God I could walk under my own power and didn’t need a stretcher! One was an older man and one was a young woman. We prayed for both of them.

We reached Mweka Camp after dark and it had begun to rain. It was muddy and pitch black in the camp. We ate a late dinner and crawled into wet tents. Tomorrow we would finally head home to Moshi. But we had victory in the camp – and that was all that mattered.