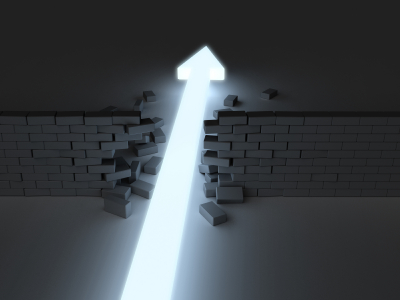 Difficulties in life often create barriers that impede our progress and our dreams. When it feels like everything you have tried isn’t working and circumstances stand like an impenetrable wall before you – you need a breakthrough!

If you are currently in a situation where you desperately need a breakthrough in your circumstances, then the Biblical story of David found in 2 Samuel 5:17-21 will resonate deeply with you.

David had just been crowned the king of Israel and immediately an enemy army came against him. Militarily, he was outnumbered. There was no way he could defeat the Philistine army with his resources. But David had a secret weapon. It was his trust in and dependence upon the “Master of Breakthroughs.”

When David saw the multitude that was arrayed against him, David did something he always did in such circumstances. He inquired of the Lord – asking what he should do. He didn’t fret or complain about the challenge he was facing, he just asked God what to do.

Then David inquired of the Lord, saying, “Shall I go up against the Philistines? Will You give them into my hand?” And the Lord said to David, “Go up, for I will certainly give the Philistines into your hand.” 2 Samuel 5:19

David immediately obeyed the Lord and went to the battle line by faith and saw God bring the victory he so desperately needed. He named the geographic location of that battle, “Baal Perazim,” which can be translated “Lord of the breaks” (from the Strong’s Hebrew Lexicon) or in a more modern phraseology, “Master of Breakthroughs.”

Just this week, our orphanage ministry was faced with a wall of financial need that was far beyond our resources to overcome. The deadline was looming and the amount of money needed was huge in comparison to the less $100 we had in the bank. Yet we were so confident that the “Master of Breakthroughs” had a way to deal with the need, that when we prayed, all we could do was thank God for all the past deliverances we had received and praise Him for the one that we were sure was on the way.

Suddenly, we saw the Master of Breakthroughs – break through for us! The money we desperately needed for the orphanage arrived in the mail the day before it was due, allowing us time to wire it to Africa and cover the needs.

Maybe the problem you are facing is so much bigger than your resources that you are tempted to despair. Don’t allow yourself to do it – because you have access to the same “Master of Breakthroughs.” Just follow the pattern we saw in David’s battle. Inquire of the Lord – seek him in prayer and ask Him what you are to do. Then be quick to obey. Stand firm in faith trusting that He will bring the victory. Don’t allow yourself to worry, fret, be anxious or speak out complaints or fear as you wait for your deliverance. And you too will have a powerful testimony of what the “Master of Breakthroughs” did in your life!