When Under Pressure…Don’t Give Up!

Consider it a sheer gift, friends, when tests and challenges come at you from all sides. You know that under pressure, your faith-life is forced into the open and shows its true colors. So don't try to get out of anything prematurely. Let it do its work so you become mature and well-developed, not deficient in any way. 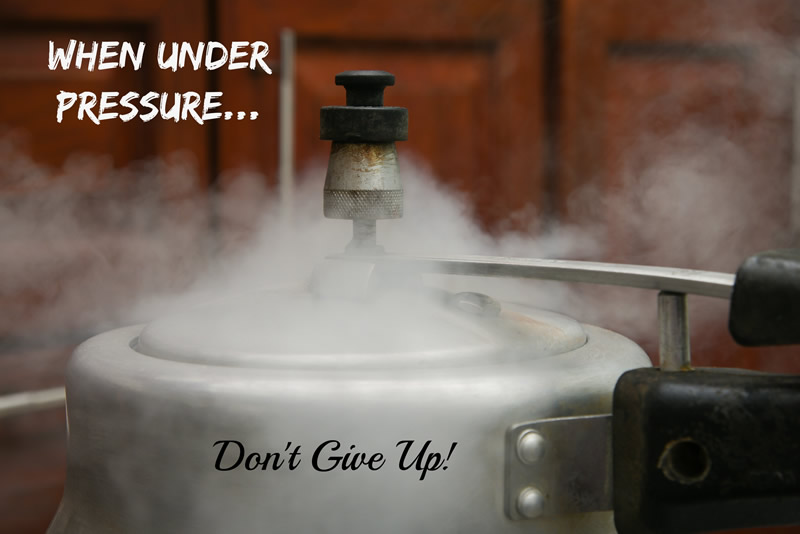 Have you ever watched an old-fashioned pressure cooker? At first, as it heats up, it seems like the pot is handling the increase in pressure without too much trouble. But as the pressure continues to build up inside that pot, the valve on the lid begins to cause the small weighted “rocker” to jiggle. The jiggling of the rocker is demonstrating that the contents are under great pressure and unless more steam is released, it could potentially explode. If the pot is removed prematurely from the heat, the pressure reduces, but the contents are left uncooked and inedible.

We are living in a season when the whole world is under pressure. People under pressure will often do ANYTHING to relieve the pressure they are experiencing. If there is pressure at home, some will seek to relieve it by running away, or divorcing their spouse. Pressure at work often tempts people to quit their jobs. Those who face pressure from being unemployed may find themselves seeking temporary relief by drinking alcohol, taking drugs, watching TV, sleeping abnormal hours, or overeating. Financial pressure will often tempt people to relieve the pressure by borrowing money at astronomical rates of interest or by declaring bankruptcy. People in ministry face many pressures and may try to relieve that pressure by closing down the ministry or resigning from their churches.

The simple truth is...

INTENSE PRESSURE TEMPTS PEOPLE TO GIVE UP!

During the economic meltdown of 2008-2010 in the United States, this ministry went through a period of excruciating financial pressure. We had opened the doors to Treasures of Africa Children’s Home less than a year before the financial crash and suddenly, donations dropped precipitously. Promised help was not forthcoming because our donors were facing tremendous financial hardships of their own, losing jobs and homes. It was a time of extreme pressure that I will never forget. We had children to feed, clothe and educate, staff salaries to pay and missionaries who had moved across the world to serve orphans. Yet from all appearances our financial support was drying up - month by painful month. We were daily praying in the money to pay the bills. Some counseled that we give up and shut down the orphanage because there was no apparent way to continue.

Had we given up at that point – and it seemed perfectly logical and reasonable to do so – I wonder where the children of Treasures of Africa would be today. One thing I know for certain, is that none of them would be in college! I can tell you honestly that it was not easy to remain steadfast in faith during that intense period of pressure, but I personally experienced the truth of God’s Word – His grace is sufficient for every situation. God’s grace gives you supernatural power to keep going when your flesh wants to give up. By remaining in that pressure-filled situation for that extended period of time, I learned lessons about walking by faith that I know I would never have learned otherwise.

God does not want YOU to give up when you find yourself under pressure. Remember the lesson of the pressure cooker – “If the pot is removed prematurely from the heat, the pressure reduces, but the contents are left uncooked and inedible.” That is a metaphor for our lives. God uses the trials we go through to produce a maturity and fruitfulness in His people if they will trust Him in the process and lean on Him for the grace to not give up prematurely. Consider the J.B. Phillips translation of James chapter 1 verses 2-4:

When all kinds of trials and temptations crowd into your lives my brothers, don't resent them as intruders, but welcome them as friends! Realize that they come to test your faith and to produce in you the quality of endurance. But let the process go on until that endurance is fully developed, and you will find you have become men of mature character with the right sort of independence.

God’s intent for all of us is that we “bear much fruit” according to John 15:8,16. And the fruit of your life is to bless other people and to glorify God in the process. When you go through a trial trusting in God for the outcome, and then see His victory in the end without having given up along the way - your life becomes “mature fruit” that others can taste and receive encouragement from.

DON’T GIVE UP when you are under pressure. Seek God to give you the grace you need to stay “in the heat” until the completed work is done in your life and you have a testimony to share with others.