But thanks be to God , who always leads us in triumph in Christ… 2 Corinthians 2:14 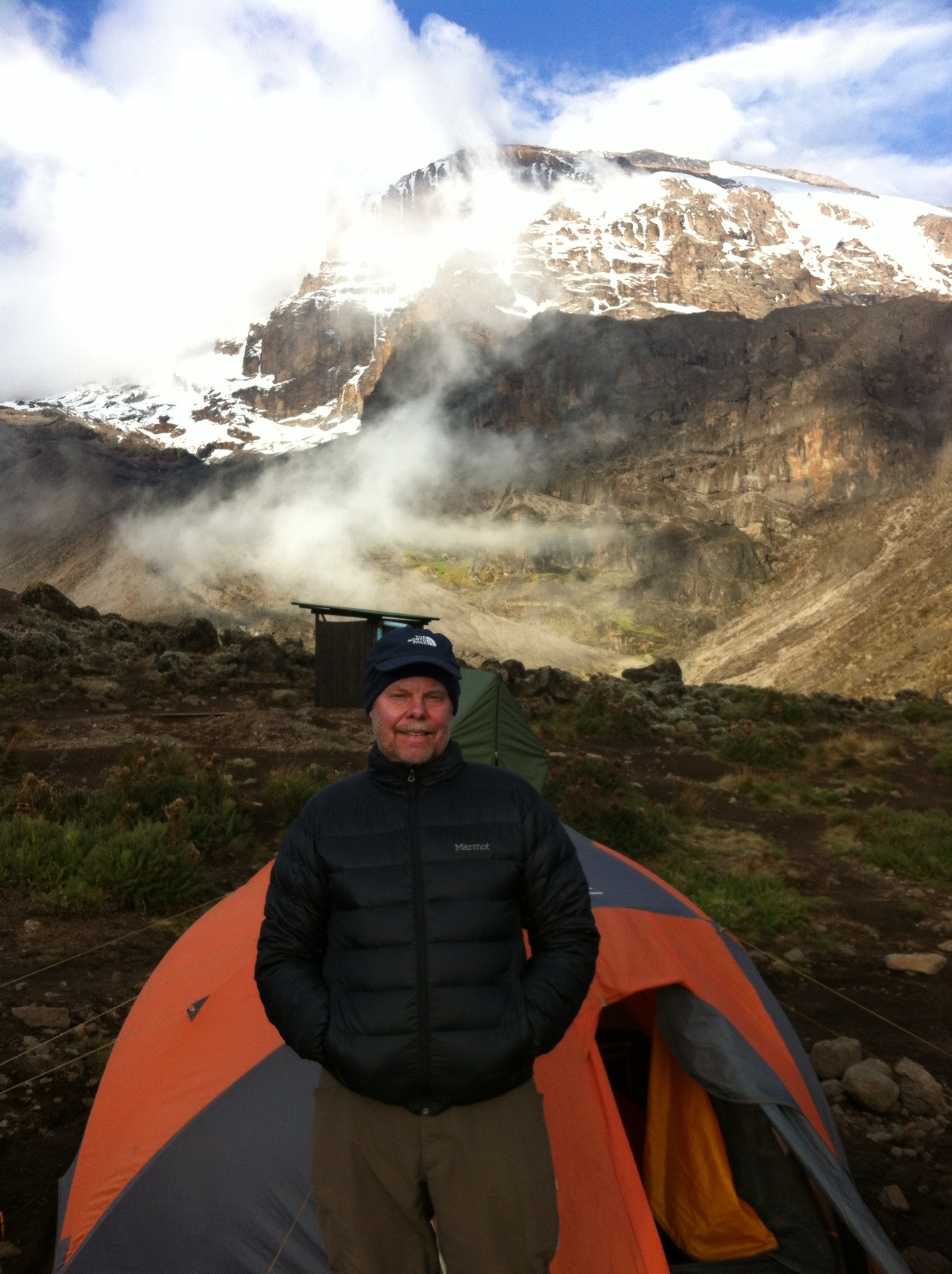 When we woke up in Karanga Camp this morning, there was a beautiful rainbow in the sky. We took it as a promise from God of His continued grace for the journey. Our trek today would take us to Barafu Camp – the basecamp from which we would launch our attempt on Uhuru Peak – the summit of Mt Kilimanjaro.

When we began hiking, we saw that our destination was the top of a ridge. We could see a defined trail that snaked its way up a high barren hillside. I breathed a sigh of relief as it looked relatively easy compared to the past few days of climbing. We were leaving an elevation of approximately 13,400 feet and heading to an elevation of 15, 443. So this would be an elevation gain of only 2,000 feet which was less than on some previous days but surely the air is thinner at that altitude.
We trekked through the most barren landscape we had ever encountered. This is called the Alpine Zone and vegetation is sparse to none. Part of the way we saw no living thing at all and it was almost moonscape-like in appearance. There is no water at this level and the porters who carry supplies for the climbers carry water from Karanga Camp where there is a stream of fresh water from which they draw. My heart ached watching the loads these men bore on their backs and heads for the convenience of the climbers.

When we ascended the hill we started down the other side and sure enough – there was another hill to climb and a ridge to conquer before we would make it to Barafu Camp. BARAFU is the word in Swahili for snow and ice. And the camp lived up to its name. Within an hour after we arrived at Barafu Camp it begin to snow! It didn’t last long and it did not stick to the ground but it was snow.

We were tired and hungry by the time we arrived in camp but overall – in comparison to all the other days of trekking this one was a “piece of cake.” I nicknamed one of our guides Mr. Piece-of-Cake because he is all too fond of using that expression to describe each part of the journey. He confidently announced to us that climbing the Barranco Wall was a “piece of cake.” Mind you this comes from a man who has climbed Kili 470 times, has the physique of Usain Bolt (the Jamaican Olympic Gold medalist), and has the lifetime ambition of climbing Mt Everest. With that perspective you can see why he calls it a piece of cake!

Tomorrow is the BIG DAY. But it actually begins at midnight when we start to climb the trail to the summit. We met some climbers who just came down from the summit and they said it was very hard and took them 9 hours to get to the summit and 3 hours to get back down to Barafu Camp. One guy commented, “if you are mentally tough you can make it.” So that is one LONG HARD day. After those intense 12 hours we will get to rest for one hour at Barafu Camp and then hike several more hours down to Mweka Camp where we will spend the night.