Reflections from the Middle East

The color of the overcast sky seemed to match the dingy gray walls of the old building we were entering. We climbed two flights of cement steps in a narrow stairwell which led up to a humble apartment on the second floor. The front door was already open when we arrived and we entered a small sitting room. Above our heads, yellow paint was peeling in huge pieces, dangling from the high ceiling like cobwebs which go unnoticed by people who have lived somewhere for a very long time. Pictures of Jesus adorned the walls. A tangle of electrical cords snaked across the floor and over the furniture, undoubtedly overloading the ancient electrical capacity of the decaying building. 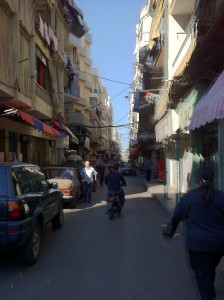 An older Arabic speaking woman welcomed us. Her kind looking face was lined with worry but it was obvious from her striking facial features that she had been quite a beauty in her youth.

A very thin man with gray hair and and missing front teeth slowly emerged from the bedroom. He walked with a cane and gingerly dragged a shoeless foot which looked horribly infected. His clothes hung on his bony body like rags. He looked far older than his 62 years. Too poor to seek medical care in a country where a hefty cash deposit must be paid before a patient is allowed admittance to a hospital, this man needed a miracle. With the family bread-winner incapacitated, I could only imagine how the stress of his illness weighed upon him and his wife.

A few moments later we were joined by a middle aged couple who sat down on the old sofa. There was both a tangible sadness and a quiet dignity about them. We soon learned that they had fled from their native Syria after losing their home when the civil war broke out. They had come to Lebanon for refuge and were now dependent on the kindness of relatives for shelter and food.

Here in a tiny apartment in a crowded Beirut neighborhood filled with decrepit buildings - these two couples share their sorrows while struggling desperately just to survive. Their situations made me think of the Syrian refugee family with nine children that I had met earlier in the week. With so many mouths to feed, the strain must be even greater.

We prayed for them and left, heavy hearted that we couldn't do more to alleviate their burdens.

These two couples are just a few of the nameless millions of Christians across the Middle East who are suffering the results of war and poverty. We need to pray for our brethren!