The Rest of Faith

For we who have believed do enter that rest…
Hebrews 4:3

A preacher during the famed Welsh Revival of the early 1900’s often used the story of a shipwreck to illustrate faith. He described three positions of faith he had observed in people: struggling faith, clinging faith, and resting faith. In a shipwreck situation where lifeboats have been tossed overboard, there are people in the water struggling to get to a lifeboat, people who are clinging to the side of the lifeboat, and those who are resting in the lifeboat. 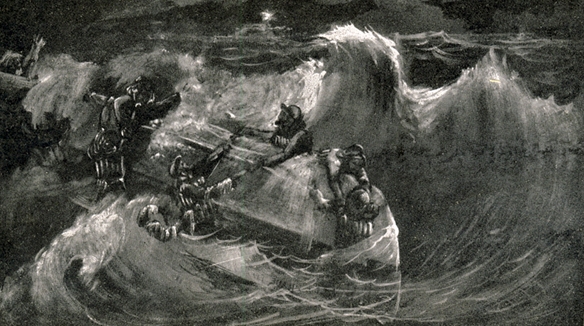 In the “struggling faith” position, the individual cannot help anyone else because he is struggling to believe God and His Word in his own life. He is simply trying to get himself to the boat of faith where he can trust God.

In the “clinging faith” position, the person is hanging on to God’s Word with all that is in him, just like a man clinging for his life to the side of the lifeboat. He is meditating on the Word, speaking the Word and trying to get into the position of “resting faith”, inside the boat.

The man or woman who has reached the place of “resting faith”, is inside the boat with both hands free to help others. That person has come to the place of absolute confidence in God and His promises regardless of the fact that the waves are still high, the storm is still raging and he hasn’t yet reached the shore where the promises are manifested. God’s deliverance is always manifested after the person gets to the position of resting faith.

God wants every believer to enter the “Rest of Faith.” For we who have believed do enter that rest… The obvious prerequisite to entering God's rest is stated clearly in this verse - it is believing God. Throughout the book of Hebrews, the apostle Paul talks about entering God’s rest.

There remains therefore a rest for the people of God. Let us therefore be diligent to enter that rest…. (Hebrews 5:9,11a NKJV)

Paul points out in Hebrews chapters 4 and 5 that the Israelites who were led by Moses and Joshua through the wilderness never entered God’s rest. He reveals two reasons why they failed to enter God’s rest: unbelief and disobedience.

And to whom did He swear that they would not enter His rest, but to those who did not obey? So we see that they could not enter in because of unbelief. (Hebrews 3:18-19 NKJV)

…and those to whom it was first preached did not enter in because of disobedience. (Hebrews 5:6b NKJV)

Unbelief and disobedience in a Christian’s life will manifest themselves in two ways. One way is to prevent you from stepping forward by faith, and the second is to get you to take matters into your own hands when God has told you to wait and trust Him to resolve a matter.

For example, if you don’t believe God is your provider and protector and your loving Father who will care for you, you won’t obey Him when He instructs you to step out in faith and do a certain thing He instructs you to do. Instead, you will be inclined to listen to a spirit of fear that says, “You better not do that, God won’t come through or help you and it will be a disaster.” And you will disobey God by not moving forward in faith.

One of my favorite examples of a person obtaining God’s deliverance after entering the “rest of faith” comes from the life of Hudson Taylor. In the mid- 1800’s in England, Taylor was preparing to go to China as a missionary. He knew that he needed to be able to trust completely in God for all his needs once he reached China. In that remote land he would be unable to contact anyone for help for many months at a time.

He decided to test his own faith in God. While serving as an assistant to a medical doctor in London as part of his training for the mission field, an opportunity for a faith test presented itself. The doctor told Taylor that he would need to remind him each time his pay was due, as he tended to be forgetful about such matters. Hudson Taylor immediately decided he would never remind the doctor but instead would go to God in prayer and trust Him to provide his needs.

The day came when the doctor did not remember that Hudson’s pay was due. Several days passed and still he did not provide his salary. Taylor’s money had run out. His rent to a Christian landlady was due that very evening and he knew she needed the money. He wondered, if for her sake, he should mention the matter of his pay to the doctor. Yet in earnest prayer he felt that he had received the strong assurance that he was to wait for God’s timing and provision.

At the end of the work day the doctor suddenly remembered Taylor’s salary. Hudson was relieved and felt happy that his rent would be covered. But then the doctor stated that he had already gone to the bank and deposited his money and he would have to wait until Monday when the bank opened again to give him his pay. Taylor’s heart sank and he quickly went to a quiet place where he could pray and pour out his heart to the Lord. Again he found peace and joy restored and he was able to rest, assured that God was not going to fail him. He stayed and studied at the doctor’s office quite late, and just as he was getting ready to leave, he heard the doctor walking through the garden toward the office.

The doctor came in and told him that an odd thing had just occurred. A wealthy patient had come at ten o’clock at night to pay his bill. He handed Hudson Taylor some of the bank notes and promised the balance to him on Monday. The amount received was more than enough for his rent. Hudson Taylor left joyfully, knowing that he could live a life of faith and go to China.

In this example, we can see that Hudson Taylor refused to give into the pressure to take matters into his own hands even though his situation was desperate. He prayed until he got to the place of resting faith, and then his deliverance came. God wants the same for you.

Ask God for the grace to bring you out of struggling and clinging faith to the place of resting faith. You will experience tremendous peace regardless of circumstances when you are confident that God is faithful and He will deliver you.