When God Closes the Door

The Lord instructed Noah to embark on a major building project which spanned several decades. Despite the ridicule of their neighbors, Noah and his family worked hard to obey God. When it was finished, Noah and his family entered the ark they had constructed. Then they watched in awe as God caused male and female pairs of every specie of animal to peacefully follow them in. Then another supernatural event occurred that is often overlooked by readers of the story of Noah's ark. God Himself closed the door of the ark behind them. 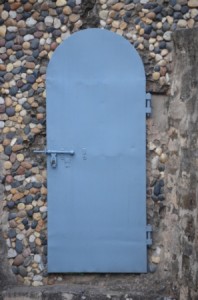 When that door closed, it cut them off from everything familiar to them. The people they had known and the places they had lived were left behind forever, never to be seen again. And God had been the One to close the door.

There are times in our lives when doors are closed that are abrupt and unexpected. And perhaps the situation we find ourselves in is so difficult or hurtful or shocking that we can't imagine why God has allowed such a thing. Yet it may not be a case of God "allowing" it. It may well be that God Himself is the One who closed the door.

Consider Noah. Though he built that ark himself - he probably was not fully prepared for the finality of the shutting of that door. It cut him off from every other human being outside of his immediate family. It took him away from his family homestead and the earth as he knew it. The closing of that door meant he would have to walk through a "new" door into the great unknown after the flood subsided.

But now consider the closing of that door from God's perspective. God closed that door to protect Noah and his family. He hid him in the ark as a way to preserve his life and to set him apart for God's divine purpose of re-populating the earth with godly seed.

You may go through a time when a door is shut in your life. It may be the end of a relationship you thought would lead to marriage, or the end of a job you thought you would work happily in for many years. At that moment - the future may appear very insecure or even fearful, like it did for Noah and his family when the door of the ark slammed shut.

Yet you can be assured of this one thing. When you are walking with God and a door is closed in your life, He has done it for your protection. It may not become apparent until some months or even years later, but you need to believe that God is always seeking your best. And when He opens that new door for you, there really is a rainbow of God's promise for you on the other side.